IHJ sponsors the IHJ Artists Forums series to provide a venue for the US-Japan Creative Artists Program Fellow to present their works and meet other artists. The I-House also produces occasional concerts and artistic events to promote mutual cultural understanding between Japan and the rest of the world. 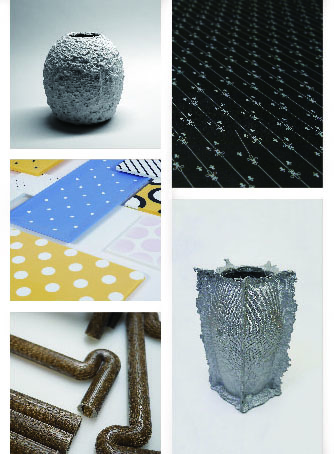 Recent narratives around fabrication and production reflect societal aspirations and fears. On the one hand, additive manufacturing and distributed manufacture promise to simplify logistics and localize production in empowering ways. On the other hand, we are reminded almost daily of the general wastefulness of inherited production practices and of our limited ability to re-circulate what we don’t or can’t use personally. It is increasingly prevalent that designers reconceive industrial waste as raw material, experiment with existing natural resources and less seemly biological and mineral byproducts, harness biology, and foster the production and sharing of knowledge and opportunities for co-creation. Today’s designers seek to change the relationships people have with materials. While many citizens may feel a lack of agency or the knowledge it requires to respond with such ethical impulses, designers and artists are uniquely positioned to respond optimistically, pragmatically, and experimentally. Brian Anderson is an academic industrial designer, based at the University of Illinois at Chicago. His work centers on the history, nature, and structure of making from the scale of artisan and craftsman to that of small factories. In his talk Anderson will present several outcomes of the manipulation of matter in the context of design. studioba.org Nashville-based writer Lee Conell will read from her in-progress novel, The Study of Hidden Creatures, which examines the way transgenerational trauma from World War II manifests in the imagination of a young woman, Freda, through monsters and ghosts. The novel draws on both ghosts and cryptids from the American South (such as Bigfoot) and yokai from Japanese folklore, while it follows Freda's attempt to explore the legacy of Chiune Sugihara, the Japanese consul in Lithuania whom she believes saved her grandfather’s life when Sugihara issued thousands of transit visas to Jewish refugees in 1940. Conell will discuss her research for this project, along with the ways its genesis was inspired by her story collection, Subcortical, and her forthcoming novel, The Party Upstairs.

Lee Conell is the author of the story collection Subcortical, which was awarded The Story Prize Spotlight Award, an Independent Publisher Book Award, and an American Fiction Award. Her novel is forthcoming from Penguin Press. Her short fiction appears in the Oxford American, the Chicago Tribune, American Short Fiction, Kenyon Review online, Guernica, Memorious, Glimmer Train, and elsewhere. She has received creative writing fellowships from the Tennessee Arts Commission, the Sewanee Writers’ Conference, Vanderbilt University, and the Yiddish Book Center. Her stories have been awarded the grand prize in the Chicago Tribune‘s Nelson Algren Literary Arts contest and received citations in the Best American Short Stories series. She has taught writing at Vanderbilt University, SUNY New Paltz, the Sewanee Young Writers’ Conference, the Vanderbilt Psychiatric Hospital, and the Nashville Public Library. Aya Rodriguez-Izumi will weave and connect projects from her interdisciplinary practice which focuses on ritual, in its myriad and varied forms. She is interested in how common everyday activities and objects can take on a ritualistic significance. Rodriguez-Izumi will guide the audience through an overarching view of her work with a focus on the traditions of her Cuban/Puerto Rican and Okinawan heritage that inspire it. She approaches these ideas in a holistic way – installation, performance, sculpture, video and beyond are all utilized depending on the project’s needs. She aims to create a transformative environment and experience for the viewer, and with this in mind this forum will end with a Q&A and an interactive group engagement. (Get Well Photo: Darnell Scott)