Interview: In Conversation with Hirao Masashi “Blazing the Way: A Young Master Brings Bonsai into a New Era”

Bonsai: a vast natural landscape expressed in a small container. One young master of this art now travels the world, shears in hand, to spread the message of its appeal—Hirao Masashi, rising talent of the garden Manseien, one of the five gardens making up the renowned Omiya Bonsai Village in Saitama Prefecture. Hirao is steeped in tradition but remains unconfined by it. What has he seen on his bonsai world travels? 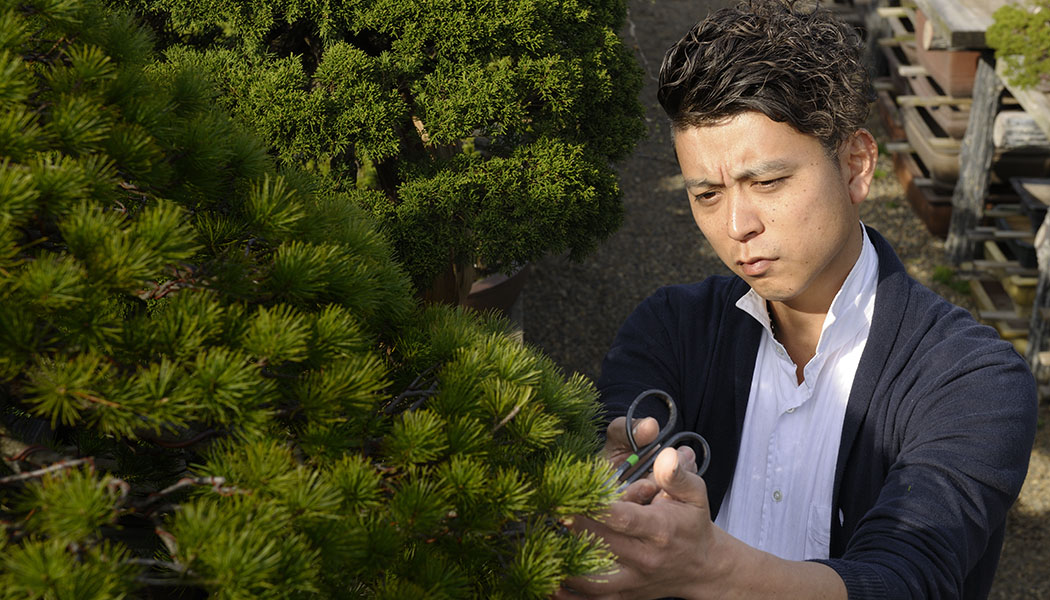 Hirao Masashi Bonsai Specialist
Born in 1981 in Tokushima Prefecture. After graduating from Kyoto Sangyo University he joined the garden Manseien in Omiya, where he was trained by the late Kato Saburo, widely acknowledged as one of the greatest of Japan’s bonsai masters. In 2013 he was appointed a Japan Cultural Envoy by the Agency for Cultural Affairs, visiting eleven countries in a four-month period.

First off, what made you decide to become a master of bonsai?

In the beginning I wanted to become a gardener. I had just turned twenty and was at university in Kyoto when I saw the garden of the hojo (abbot’s quarters) of the temple Tofukuji and it blew me away. It’s a traditional Japanese garden by the garden designer Shigemori Mirei. I was deeply inspired by the unique sensibility it expressed and thought, “It would be pretty cool to carry on the traditions of Japanese culture.”

But when I went to my first interview to become a gardener, they put me off, saying, “Look, it’s just a job digging holes and sticking trees in them.” When he saw how discouraged I was, the gardener invited me out for a meal, and told me to wait for him at a nearby bonsai garden. There was a bonsai there of a mixed forest and I suddenly saw the landscape of my childhood spreading out before my eyes. This was my fateful encounter with bonsai. So after I graduated from university I found myself knocking at the gate of Manseien, the famous bonsai garden in Omiya. 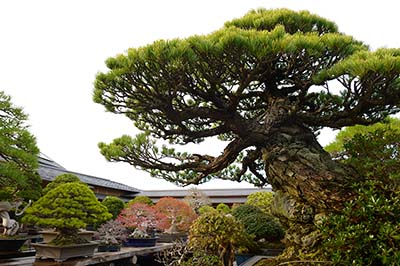 Since bonsai is literally a living art, the first thing I had to do was study trees as thoroughly as possible. I spent the first four years doing nothing but watering. But it is not as simple as it sounds. The amount of water and the way you give it depends on many factors: the type of tree, its age, the depth of the pot, the texture of the soil, and so on. In some cases a tree can take three years to recover from the mistake of a single day in watering. Feeling is important, too. Once I became distracted for a while when a girlfriend broke up with me and the trees got a little weird as well [laughs]. But that’s what it means to be alive, isn’t it? Living things respond to whatever you do to them.

Since I started making bonsai, I’ve made it a point to meet and talk with as many people as possible. It may seem surprising, but in bonsai set forms are not as important to expression as is feeling. Of course there are some established rules, but the real trees you come across are rarely as perfect as the ones you see in textbooks. In fact, my teacher never provided me with “answers.” So I listen to what a lot of people have to say, feel things out for myself, and try to expand my imagination.

In Japan bonsai is viewed as a pastime for older folks, but overseas it seems to have a broader generational demographic as a fine art.

Yes. When I first went abroad in 2009, I was surprised to find that bonsai was much better known in other countries than I had expected. It’s quite popular in Europe, especially in Italy, Spain, and Germany. In recent years it has spread to Eastern Europe, where there are some amazingly gifted practitioners. There are also many passionate bonsai enthusiasts in Asia and North and South America, and here at Manseien we have apprentices from the United States and the Philippines. Over the past decade Japan’s exports of bonsai have increased tenfold, and I think there is plenty of room for overseas interest to keep growing.

Conversely, the number of Japanese interested in bonsai hit its peak with the era of the economic “bubble.” Currently membership in the Nippon Bonsai Association has dropped below 7,000 and most are in their seventies. Despite this, bonsai styles and marketing haven’t changed at all. But this also gives journeyman bonsai workers like myself a chance to shake things up and make a contribution.

In 2013 you were appointed as a Japan Cultural Envoy* by the Agency for Cultural Affairs and toured the world. What did you do on the tour?

I visited eleven countries: Lithuania, Italy, France, the Netherlands, Turkey, the United States, Mexico, Germany, Spain, Australia, and China. During the four months I gave about a hundred workshops, demonstrations, and gallery exhibitions aimed at local bonsai enthusiasts and the general public.

Workshops overseas really attract a broad spectrum of people. All ages and levels of ability, and the bonsai they brought to show me were equally varied. What I realized from this was that the ways in which bonsai is practiced and enjoyed can be very different in different cultures and environments. Because of this, rather than pushing “Japanese bonsai” on other people, I began by trying to get them to enjoy and appreciate it, to arrive at a shared image of what we wanted to express, and then work together to realize it.

In Milan, I myself was presented with opportunities to approach bonsai from a fresh perspective. For example, I gave a demonstration accompanied by a jazz band, decorated a winery in an old castle with bonsai, and tried a joint gallery exhibition with works of calligraphy. All of these would have been difficult to conceive of in Japan, and I think it is important to break down our preconceived ideas in this way. 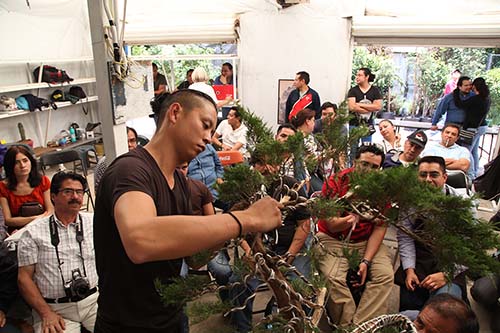 Demonstration for a passionate group of Mexican bonsai enthusiasts. Questions from the audience came one after the other, and the event ran four hours longer than its scheduled time.

Are there big differences in overseas bonsai and Japanese bonsai?

Yes, there are. Trees are living things, and overseas they do not necessarily have the same varieties we have in Japan. Differences in climate mean that the trees themselves, the varieties of moss, methods of temperature and humidity control, times for tending, and so on, are all different.

The aesthetics of bonsai also differ according to national character. Chinese like things bigger; Korean bonsai tend to be formal in their movement and appearance. In the Philippines they make bonsai out of trees that grow in the ocean, and water them with salt water….[laughs]. So the result is that I may learn more from people overseas than they do from me. “ When in Rome…” I try to respect the style of the countries I visit, and if they appreciate what I am doing, it makes me quite happy. 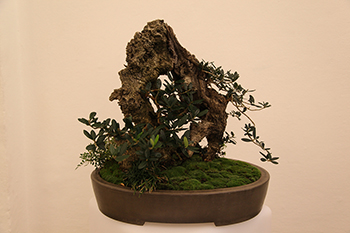 An olive tree bonsai Hirao created inspired by his visit to Italy.

If standards of beauty and value are broadened globally, might that result in pulling away from traditional Japanese bonsai?

Yes, but I think that is OK. We are dealing with living things in bonsai, and it is impossible to force them into a single formal approach or style. In other words, if we want bonsai to go global, we must also spread it locally, country by country. It would be a great honor to us if people overseas got to know bonsai, studied it more deeply, and came to the conclusion that Japanese bonsai really is pretty amazing and worthy of a broader audience. But I don’t think it makes much sense to try to push it on people as a form of Japanese culture.

Tradition and form are of course important. But if we cling to them too rigidly, we narrow the entrance to what should be the delightful world of bonsai, and shut the door to people who want to get started in it. I am actually doing everything I can at present to try to lower that threshold to entry.

The quadrennial World Bonsai Convention will be held in Omiya in 2017, with some 70,000 people from all over Japan and the world expected to attend. How would you like to see the bonsai community prepare for this major event?

I’d like to see both sides of Japanese bonsai—tradition and innovation—represented at the convention. Because the inheritance of culture is not just the carrying on of tradition, but also the continual challenge of experimentation. While keeping the mainstream solidly in sight, we should continually propose new ideas, attract people, and inspire them to keep saying that, yes, Japan is truly the mecca of bonsai culture. So I hope that we could have a large number of Japanese participants at the convention. And I hope we will attract a lot of young people in particular, people who may not have had the opportunity to get interested in bonsai before. To become a good point of first contact, I will continue to work to broaden the range of my activities beyond the Bonsai Village.

* Japan Cultural Envoy: A system established in 2003 by the Agency for Cultural Affairs to encourage overseas appreciation of Japanese culture and promote the formation and strengthening of international cultural networks by sending selected Japanese artists and cultural figures abroad.