You may have heard of the term “third place”—cafés, bars, bookstores, and other hangouts that are neither the workplace nor the home. The value of such places is currently being rediscovered. We invited Michael Molasky, who has long studied izakaya (Japanese-style pubs) as an urban cultural milieu, and Uchinuma Shintaro, who has proposed a new business model of the small neighborhood bookstore as a potentially lively “third place,” to discuss the attraction of such spaces.

Michael Molasky Professor, Waseda University
Born 1956 in St. Louis. First came to Japan in 1976. Earned a doctorate in East Asian Languages and Civilizations at the University of Chicago, specializing in Japanese literature. Taught at the University of Minnesota and at Hitotsubashi University before being appointed to his present position at Waseda University. In addition to Sengo Nihon no jazu bunka [The Jazz Culture of Postwar Japan], which won the 2006 Suntory Prize for Social Sciences and Humanities, he is the author of a number of essays and books dealing with izakaya culture in Japan, including Nomeba miyako [A Man’s Pub Is His Castle] (Chikuma Shobo). 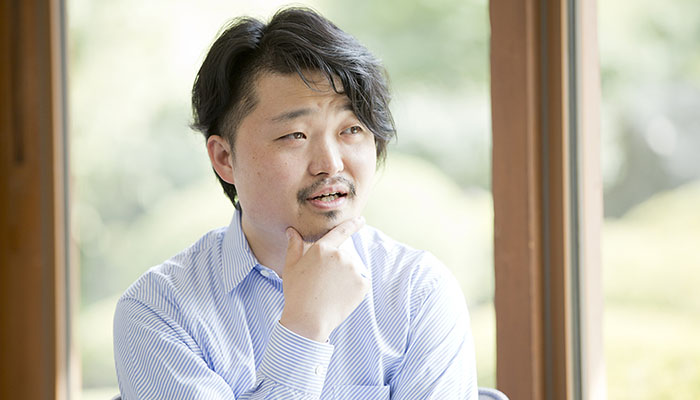 Uchinuma Shintaro Book coordinator; B&B bookstore co-owner
Born 1980. Graduated from Hitotsubashi University with a degree in commerce and management. After working for a company organizing international trade fairs and an independent bookstore, he became a book coordinator. In 2012, as a joint venture with Hakuhodo Kettle, Inc., a creative agency, he opened B&B (for “books and beer”), a bookstore and event space in the Shimokitazawa district of Tokyo. He is the author of Hon no gyakushu [The Revenge of the Book] (Asahi Press) and other works.

Bookstores and Bars Are Similar?

Michael Molasky: Uchinuma-san, what was it that inspired you to open B&B in Shimokitazawa?

Uchinuma Shintaro: It’s been two years since we first opened in July 2012. I’ve always loved bookstores, and I had become what I call a book coordinator, selecting books for the reading nooks in clothing shops, cafés and restaurants, waiting rooms in hospitals, and the like.

Then I participated in a project for a magazine that involved visiting bookstores all over the country, which made me begin to think more seriously about what the bookstores of the future ought to be like. What can the small neighborhood bookstore do to feed the intellectual curiosity of people passing by, and how can it manage to survive? My answer to this question was B&B, which I launched in partnership with Shima Koichiro from Hakuhodo Kettle.

In addition to the books and beer of our name, we also hold nightly talks and other events, and sell the furniture we use in the shop. In other words, our overall business is based on several revenue streams, all to maintain our profitability as a bookseller. 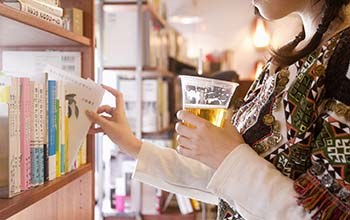 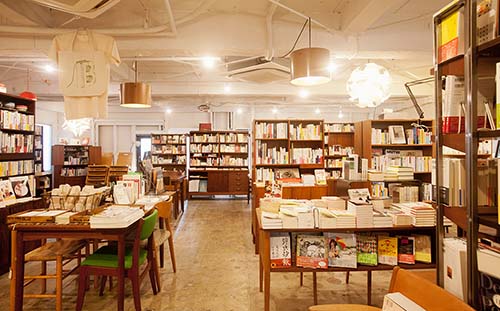 The uniquely arranged shelves in B&B are stocked with some 7,000 books to invite the reader.

Molasky: It’s an intriguing strategy. When I visited B&B I was really struck by the amount of imagination that went into your book selection. The way books are selected and categorized for shelf display can give very different impressions, but I think the selection at B&B is one that 10 different people would find interesting in 10 completely different ways. I sense a playfulness there, and a kind of trust in the patrons. And I think this communicates to customers.

One of the first books that caught my eye was by Shono Junzo. He is a low-key but sophisticated writer, one whose work echoes quietly in your mind. He was never a best-seller, even in his day [the 1950s through the ’70s]. Quite a nice pick, I thought.

Uchinuma: Thank you. A lot of folks who haven’t been to the store seem to think it is some kind of flashy place where the books are just a sideline [laughs]. But we actually take our book selection very seriously.

I think our encounter with a book is a lot like meeting another person. At B&B we consciously avoid the handwritten store recommendations which you often find at bookstores. That’s because when our patrons stand in front of our shelves, we want them to discover for themselves the books that interest them. A little thousand-square-foot neighborhood bookstore like ours is not so much in the business of providing people with specific books on request, but in trying to provide interesting books for people who are not sure what they are looking for.

We can’t win the numbers game with Amazon or the big bookstore chains. But precisely because of this, “our little world” can’t be too small. It’s fun to have interesting jumps in our selection—“I can’t believe this book is right beside that one!”—and offer people new discoveries.

And we want our customers to keep coming back, so we turn the shelves over pretty regularly. Just like you might meet different people each time you go to a neighborhood bar, we’d like folks to experience a bit of chance encounter in their reading life.

Molasky: A bookstore like B&B really is a bit like a quirky local pub, a place you can go to with the sense you might make an interesting encounter or discovery. Work and home can get humdrum, and we like to have a sense of anticipation, thinking there must be a more fulfilling way to spend out precious time. If we’ve got a place where we are a regular, we can relax there, but can still feel the excitement of always encountering something new. I think that’s the attraction of the so-called “third place.”

The Essence of the “Third Place”

Uchinuma: The “third place,” as we often hear it now, usually refers to places like bars, coffee shops, and perhaps bookstores. But I do wonder if we can really think of all such places in the same way. After all, there are other places in the city that people casually stop into, such as convenience stores and drugstores. But in the sense of encounters and communication with other people, they all seem completely different in nature.

Molasky: It’s true that as the phrase “third place” has gained popularity, its definition has broadened and lost some of its usefulness.

As you know, the concept of the third place was popularized by the American urban sociologist Ray Oldenburg in his book The Great Good Place,* which mourned the loss of community in contemporary American society and investigated the nature of human connections in such representative third places as the French café, the English pub, or the German bier-garten.

And what about Japan? Here, the archetypical third place is the izakaya, or Japanese pub, and especially its most humble variant, the akachochin, with its red lantern outside and single narrow counter. You might say it is one of the few places in urban daily life where strangers can mingle casually. Japanese coffee shops, conversely, are places where people basically go to be left alone, and convenience stores are too soulless, with even the staff turning over every few months.

Uchinuma: In your own writing, you cite the Japanese public bath or sento as another venue that functions as a third place.

Molasky: Yes. To me, the essence of the third place is that it is one where you are greeted as an individual. If a shop and its owner have a strong personality or individual character, then this attracts people who appreciate that, and a loose relationship naturally develops. Over time, these regulars nurture the place along with the owner.

The communication does not have to involve engaging in a lot of discussion with other people. One regular at the izakaya I go to almost never says anything, but is clearly enjoying being there, drinking with the other customers. So he, too, is a participant, contributing to the atmosphere of the place.

So what is the significance of such places? You could make the same food at home, just as you could have the same books sent to your house. But it wouldn’t be the same, would it? In urban life we are constantly surrounded by strangers. And precisely because of this, I think it is important to have places where we can reconfirm our individuality and have it acknowledged by others with no reference to position, title, or status.

In American cities, there are frequent opportunities to have casual conversations with complete strangers—the checkout line at the supermarket, waiting for a bus or subway. But in Japan, at least in Tokyo, this is not the custom, and as urban stores and businesses become ever more homogeneous, third places are becoming harder to find. 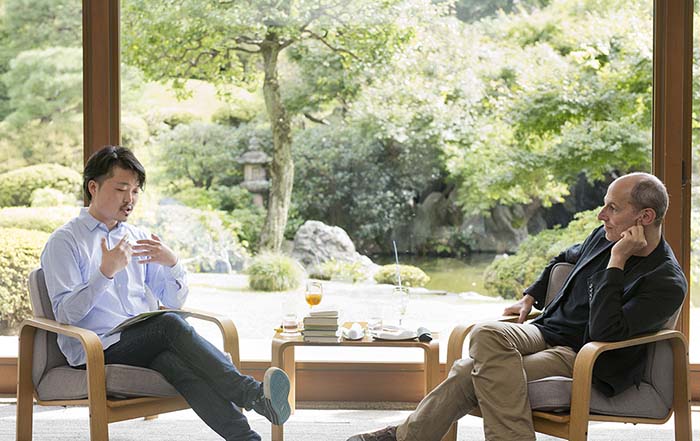 Enjoying “Place” in the Age of the Internet

Uchinuma: One thing bothering me recently is what I think is an overreaction to leaks of personal information. Of course things like credit card security are important, but these days people are getting upset over information that not long ago was regarded as common or public knowledge.

On the one hand people want to be acknowledged as individuals, yet at the same time they have become paranoid about sharing any information about themselves with others. This probably has something to do with the fact that Japanese have always found it difficult to talk to strangers, but some people seem to resist shops that give off too much of a whiff of individuality and prefer to go to chain stores where no one is likely to talk to them.

Molasky: People like that may very well be engaged in an active social life on the Internet. The Internet is a safe haven where you don’t have to show your face or name, and where communication has become highly specialized—where people with similar interests can congregate easily.

It’s really convenient for gathering technical information, but when the community space is restricted to this virtual realm, it becomes difficult for people to come into contact with others who are really different from themselves, or to encounter environments different from the familiar one in which they have been raised. In real places, the people you encounter are not limited to those of the same generation, orientation, background, or interests.

Uchinuma: Some people are saying that the physical bookstore is no longer necessary, but I absolutely disagree. The advance of technology and the Internet has made connections among people, and between people and things, much easier. And I think the form of our communication around books itself contains great potential for change as a result of the Internet.

But no matter how much technology advances, people will continue to desire the opportunity to experience new encounters in real places. Although there may be many people who are as yet unaware of having this vague desire.

Molasky: It often takes an encounter with something new to realize, “Oh, there are such things in the world,” or “Oh, I never looked at it this way before.”

In my classes at the university, I give my students the assignment to go alone to a local pub or a small sociable restaurant where they are likely to be engaged in conversation. By doing so they meet different people, encounter different opinions, come to know themselves better, develop the capacity to imagine the other person’s point of view. And I think this expands and deepens their understanding of the world, at least a little.

In this new era of virtual communication, I think a “place” where people who would not ordinarily meet can come into contact with one another is perhaps more important than ever before.