As part of the run-up to the Tokyo International Literary Festival (organized by Nippon Foundation), scheduled for March 2–6, 2016, authors Tawada Yoko and Kawakami Mieko gave a public talk titled “Writing in (M)other Tongues,” at I-House on November 16, 2015. Their works have been translated into various languages and admired by people around the world. In the talk, the two authors discussed the possibilities of language in an age when writers are active across national borders, exploring concepts like translation, language, and physicality. 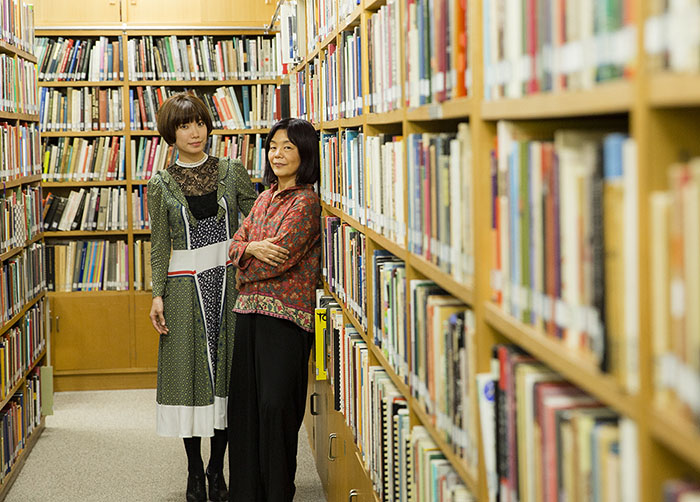 Photographed in the I-House Library (Tawada at right)

Tawada Yoko Author/poet
Lives in Berlin. Received her undergraduate education at Waseda University with a major in Russian literature. She received her doctorate in German literature at the University of Zurich. She writes poetry and fiction both in Japanese and German. Her major works include “The Bridegroom Was a Dog” (Akutagawa Prize), Yuki no renshu sei (Noma Bungei Prize), Kentoshi, and Kotoba to aruku nikki. In 2005, she received the Goethe Medal. Her works have been translated into numerous languages and she has held reading performances around the world.
Kawakami Mieko Author/poet
Born in Osaka. She won the Akutagawa Prize for “Chichi to ran.” Her major works include Heaven (Ministry of Education’s Fine Arts Award for Debut Work, Murasaki Shikibu Prize), Ai no yume toka (Tanizaki Jun’ichiro Prize), and Akogare. Her collection of prose poems Sentan de sasuwa sasareruwa soraeewa was awarded the Nakahara Chuya Prize, and Mizugame won the Takami Jun Prize. Her works have been translated into various languages, winning her recognition as a leading contemporary Japanese author.

Encounter with the Language of Others
Tawada Yoko, whose linguistic roots lie in Japanese, uses German on a day-to-day basis. Kawakami Mieko, on the other hand, draws from both standard Japanese and Osaka dialect in forming her narratives. Both populate their works with numerous instances of hiragana and onomatopoeia, creating stories that simultaneously present readers with a bold, defiant take on language but still maintain a comfortable, rhythmical feel. Conscious of every word, even the most common, ordinary expressions, Tawada and Kawakami color their writing with an insatiable linguistic curiosity and distinctive interpretations of written phrases.

Besides writing their own narratives, Tawada and Kawakami have also recently been engaging with literature from a different angle: translation. Tawada completed a new translation of Kafka’s “Metamorphosis,” and Kawakami translated Higuchi Ichiyo’s “Takekurabe” (Growing Up) into modern Japanese. Working on Kafka gave Tawada a challenging encounter with the restrictive nature of translation, a process where the translator has virtually no room to fit the original author’s text to his or her preferences. Immersing herself in the sensations of Kafka’s descriptive style, which casts the narrator as an “insect with legs waving about helplessly,” Tawada had to let her perceptive experience dictate the course of the translation.

For Kawakami, rendering the “density” and overall “tension” of the beginning of “Takekurabe”—a long, uninterrupted stream of prose— in modern Japanese was a daunting challenge. As she worked on her translation, Kawakami realized that “style” isn’t a formal construct like how Japanese people use the polite copula (“desu”) and polite verb ending (“-masu”)—it’s more of a “biorhythm,” a pattern of waves that delineates the mood and tension of the story. “I felt this was a true encounter with the language of another,” Kawakami said. 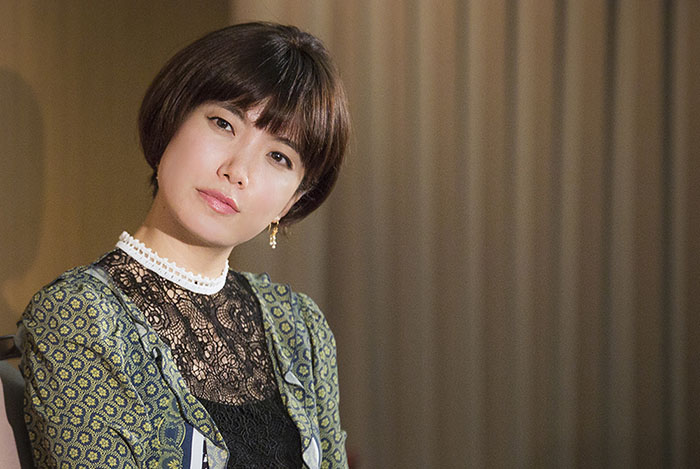 “Metamorphosing” Text
Tawada has also translated her own Japanese works into German. Self-translation, she says, can be frustrating. When she was translating her own Yuki no renshusei (The apprentices of snow), it was like dealing with the literary equivalent of an untamable wild animal—even though she wrote it herself, she couldn’t put it exactly the way she wanted to in German.

The characterization of the narrator, a polar bear, posed several problems: German sentences always have explicit subjects, for example, which made for an unnatural narrative structure. On top of that, German uses different words for the “hand” of an animal and the “hand” of a person—and that clear distinction robbed the German version of the innate ambiguity surrounding the narrator’s identity in the original. German readers end up realizing that the narrator is a bear earlier than Japanese readers can.

Despite all these challenges, however, Tawada stresses that the filters of translation don’t just subtract elements from a given work. “While some things drop out of the picture, new things come in,” she explained. “Translation is a metamorphosis, in that way.”

Working on her translation of “Takekurabe,” which weaves its story in spare, delicate passages, Kawakami knew that she’d have to fill in the occasional gap with additional words. She didn’t just throw things in arbitrarily, though—the process was more about adding expressions and filling the modern rendering with nuances that she could read between the lines in the original.

Is There Really a “Mother Tongue”?
Tawada’s translations and original works have been a major influence on Kawakami. Inspired by Tawada’s belief that “people are always translating— even when they’re reading in their mother tongue,” Kawakami felt more confident that she could tackle her translation of “Takekurabe.”

The idea of a “mother tongue” has always fascinated Tawada, who now doubts there even is such a thing. In some homes, she says, the mothers and fathers speak different languages. A mother might speak in Kansai dialect while her children use standard Japanese. A true “mother” tongue, then, is an illusory concept with ever-changing contours. 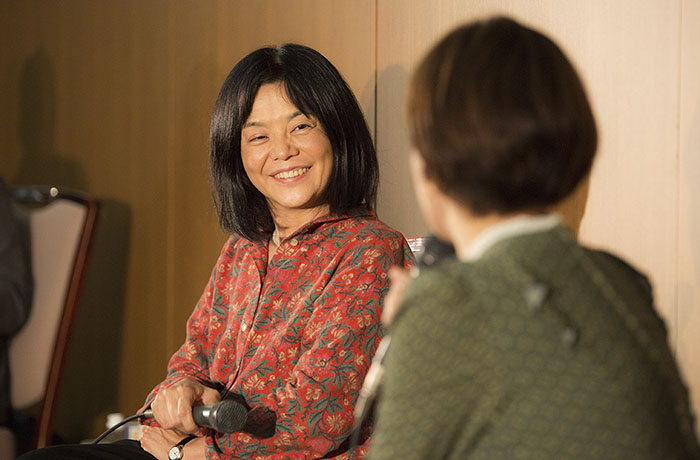 Translation Creates New Language
One of Kawakami’s early works, “Chichi to ran” (Breasts and eggs), features an idiosyncratic style with Osaka dialect-laden sentences and seemingly endless outpourings of words—interrupted only with commas. It’s already been published in French, Chinese, and many other languages, but there must have been lots of things that simply couldn’t be translated in conventional ways. For Kawakami, the scholar Yanase Naoki’s translation of James Joyce’s Finnegans Wake epitomizes what she wants the translations of her work to be: “Yanase invented new Japanese words to translate Joyce,” Kawakami explained. “The same thing should happen when people translate Japanese works, I suppose. I think it’s important to expose foreign readers to one-of-a-kind, norm-defying Japanese.”

In Tawada’s eyes, there’s also a real value to writing in untranslatable Japanese. The texts that she uses for her own reading performances don’t even make much sense in Japanese, let alone in translation. Despite the lack of a word-for-word translation, though, she knows that people can connect with the act at a basic level and create a text to reflect that understanding. Unlike reading and hearing simple sounds, languages have verbal structures that inherently stimulate the brain: when you don’t understand what someone is saying, you naturally sense and subconsciously react to the presence of an underlying linguistic system. “You can even listen to your own mother tongue without paying attention to the meaning,” Tawada says.

The “Heterogeneity” of Language

Now that “translation culture” is growing and writers from around the world are exploring their literary inspirations across national borders, it’s no wonder that the prospects of being translated have started to shape authors’ creative output. For Tawada, however, it’s almost impossible to be conscious of another language while she’s writing. The only time she actually made a deliberate effort to create a thoroughly bilingual work, writing simultaneously in German and Japanese, was with Tabi o suru hadaka no me (The naked eye)—but she quickly found that she had to devote all her attention to whichever language she was writing in at a given moment.

Now, Tawada sees dimensions of “heterogeneity” within each individual language she uses. Kawakami’s Watakushi ritsu in ha-a, mata wa sekai (My ego ratio, my teeth, and the world) is a good example, Tawada says. The title and the work itself are both in Japanese, but individual pieces reveal a lingual diversity: “ritsu” probably comes from China, and it’s anyone’s guess what language “in” might be. In Tawada’s eyes, good writing depends on “how well you can draw those heterogeneous pieces up to the surface.” Translation, for her, is a captivating subject: not only does it provide a helpful gateway to discussing creative writing and literature, but it also brings to mind a lot of the things that go into her definition of what literature is—and what it can be. 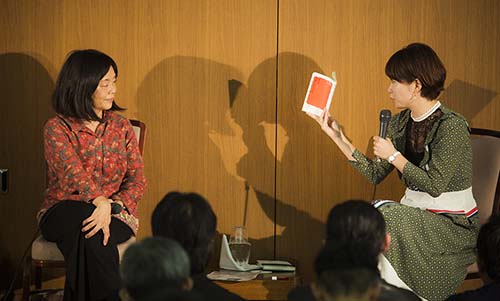 Kawakami echoed Tawada’s views, saying that talking about translation, the creative process, and literature makes writing novels less difficult. One of the insights that Kawakami has arrived at is how Japanese translations of foreign novels and original Japanese works are both in Japanese, of course, but the linguistic characters of the two categories seem to breathe a bit differently—a Japanese translation always seems to betray the fact that it’s a rendering of a different original text. When she’s reading a translation of a foreign novel, she can’t help but feel that there’s something more to the narrative, something more to probe, than what the text is expressing. For Kawakami, that interlingual space nurtures her desire to know the whole story, making her a more active reader. “What really gives me the itch to write are foreign novels,” she says. “It’s amazing how they can stir up that urge.”

Connecting the World and the Body
As the discussion went on, the theme shifted from “style as a biorhythm” to the idea of physicality. When Kawakami received her first request for a novel, she decided to copy out one of Tawada’s short stories, “Gottoharuto tetsudo” (Gotthard railway) by hand to get a better idea of what writing 60 or so pages would feel like on a physical level. That process was her first gateway to exploring the concept of physicality. Tawada’s works always look into the outside world, past her own personal scope of existence, to find a kind of “physicality,” Kawakami says. “By verbalizing the connections between that far-off, global-level physicality and the physicality of her immediate experience,” Kawakami continued, “I think she’s trying to understand and see just how far the frontier of physicality stretches—how far out we can locate the physical.”

Kawakami isn’t a traveler herself—she prefers to stay snuggled up in her futon, letting her eyes gaze at the unchanging views outside her windows. “When you get into a cold bed, your body gradually adapts itself to the temperature,” Kawakami explained. “That’s the same thing that happens with my view of myself and my view of the world. It’s like I start discovering the outside world inside my own single body, a motionless canvas sitting right in front of me. I start feeling like there’s a whole town in my stomach—it’s that kind of sensation.” Giving her own take on that idea, Tawada doesn’t like the sense of physical pain that comes with trying to depict her own physicality; she’d rather put her mouth or eyes or other bodily elements in the scenery.

The two authors might seem like polar opposites when it comes to the idea of “movement,” with Tawada jetting around the globe and Kawakami adhering to a more stationary way of life, but there’s a commonality in how they use words to connect the idea of the “body” to the far-off reaches of the world. Tawada sees those similarities, too. She loves the feeling of being on a sleeper train and knowing that she’s completely motionless while the world flashes by out the windows. “You take your whole body with you when you travel,” Tawada said, “so that physical constancy is there regardless of whether you’re in motion.” Kawakami gets that basic sensation, but she looks at things from the opposite perspective: “I’m perfectly still,” she explained, “but I feel like I’m having the experiences from action.”

One Final Performance
After the discussion, the two authors read selections from their own works. Kawakami began with “Senso hanayome” (War bride) (from Mizugame [Water vessel], a collection of poetry), a poem that explores a girl’s consciousness and physicality. For her reading, Tawada performed poems that showcased her brand of dynamic, entertaining wordplay. As Kawakami and Tawada released their words into the air, the room pulsed with a quiet heat. 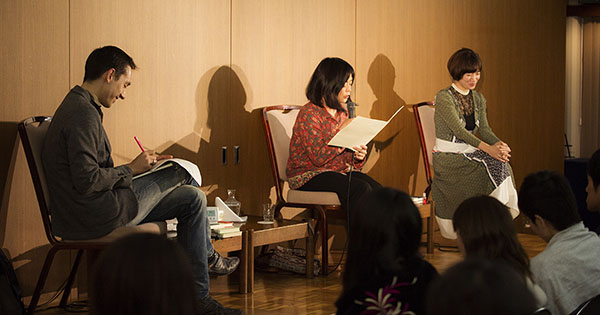