Interview: In Conversation with Honda Kouichi “Enraptured by Arabic Calligraphy Finding the Arab Heart in the Ultimate Art of Letters”

Arabic calligraphy is the art of letters employing the forms of the written Arabic language. A millennium of refinement has produced these exquisitely designed letterforms, expressing the text of the Qur’an, the holy scripture of Islam. Honda Kouichi is one of the most renowned Arabic calligraphers of our time. His works have received international acclaim and a place in collections such as that of the British Museum. We interviewed Honda to learn about his first encounter with this art form, the spirit of the Arab world that can be glimpsed through it, and calligraphy as a medium for cultural exchange. 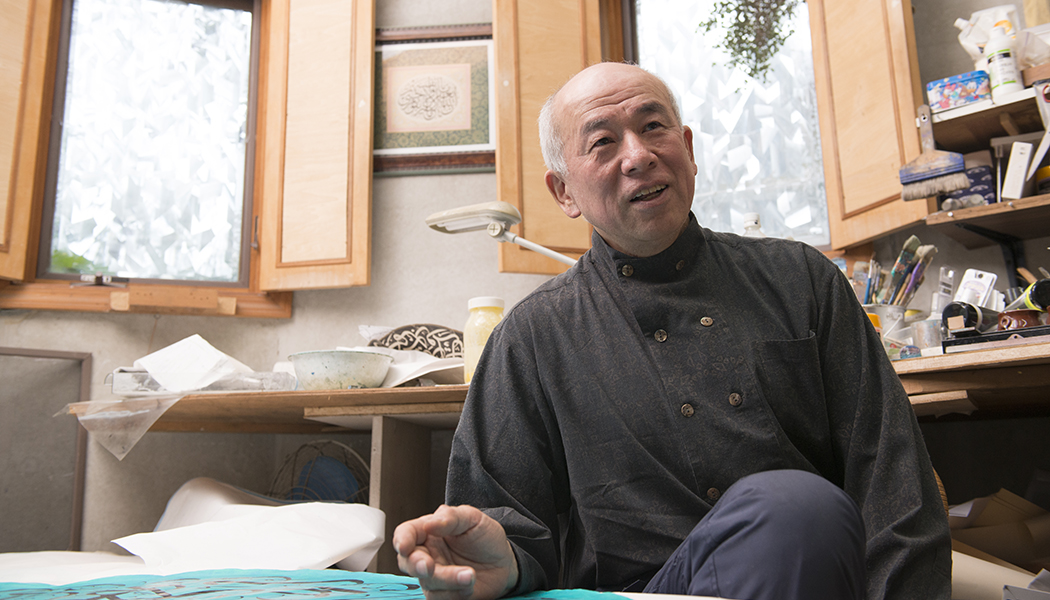 Honda Kouichi Arabic calligrapher
Born in Tokyo in 1946. Arabic calligrapher (recipient of an “Ijaza” diploma) and president of the Japan Arabic Calligraphy Association. After graduating with a degree in Arabic language from the Tokyo University of Foreign Studies, he worked as an interpreter in the Middle East, where he had his first encounter with Arabic calligraphy. After this, he studied with the Turkish calligrapher Hasan Çelebi, and has won numerous awards for his work. One of his representative works, a three-part series entitled “The Face of God,” is in the collection of the British Museum. His published works include The Cosmos of Arabic Calligraphy (Hakusuisha, 2006).

Arabic letters form patterns like those carved in the sand by the desert winds. Dunes in brilliant shades of blue are filled, in subtle harmonies, with the words of the Qur’an. This is Honda Kouichi’s Blue Desert. It is a world that seems to capture the primal vision of the Saudi Arabian desert experienced by Honda as he was on the verge of devoting his life to the practice of Arabic calligraphy—its heavenly beauty takes the breath away. 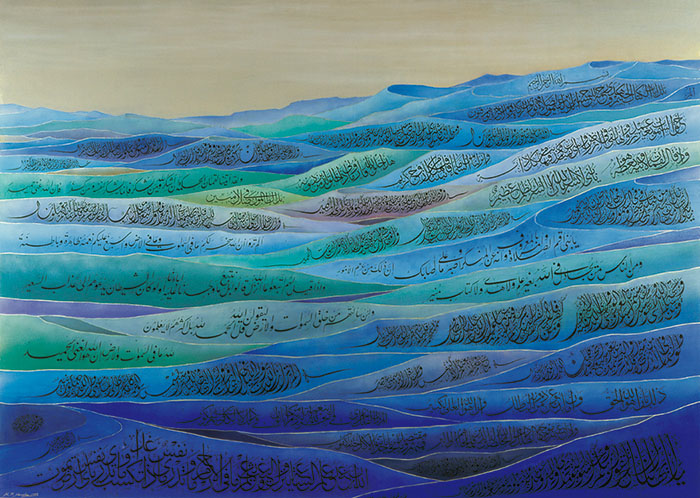 What type of art is Arabic calligraphy?

Arabic calligraphy is an art that developed out of the desire to copy the words of the Qur’an, the holy book of Islam, as beautifully as possible in an age before the development of printing technology. Subsequently, it was refined over a millennium of time in all the nations of the Islamic world and those which use the Arabic script, and influenced by their different aesthetics.

We have a tendency to think of calligraphy as a monopoly of Japan, China, and other countries using Chinese characters, but there is a long tradition of calligraphy in both the West and the Arab world. The spirit of Arabic calligraphy in particular bears some resemblance to the practices we know in Japan as “ways” (such as shodo, “the Way of the Brush”), but with an even more sacred quality, as its intent is to give the Word of God an appropriately beautiful form, in order to draw closer to the divine.

It is clearly an art that cannot be divorced from Islam, but can anyone learn it?

It is not a vehicle for trying to spread the Islamic faith, and it can be studied by anyone, regardless of religion, nationality, or gender. Essentially, in my understanding, Islam is about a direct personal relationship with God, and doing calligraphy is a way of coming to know God. That said, writing the Word of God is no easy task. It’s a bit different from the kind of calligraphy we might have learned at school or in a class. Master calligraphers have practiced all their lives to be able to write a single beautiful line, and that tradition of practice has been passed down through generations of masters and students. 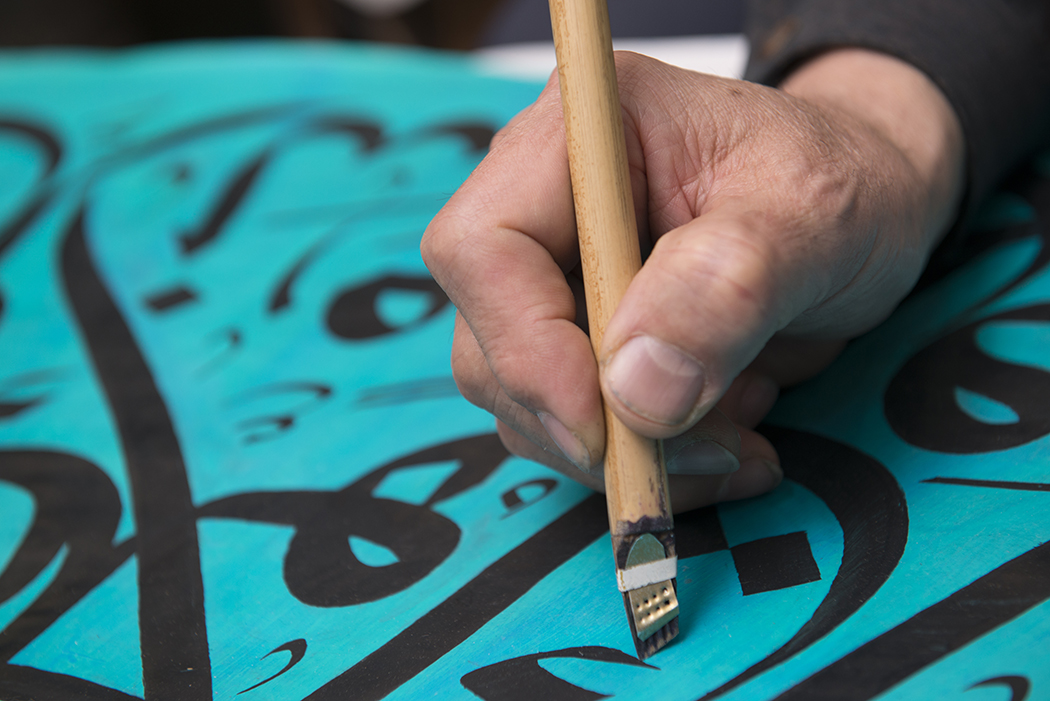 Calligraphers first polish their paper for a smooth stroke without the spreading of ink into the paper.

Meanwhile, in Japan Arabic calligraphy is taken up as more of a hobby. Although the number of students is still small, the Japan Arabic Calligraphy Association currently has over 300 members and more than 20 classrooms nationwide. There is an International Calligraphy Competition held every three years in Istanbul, said to be a rite of passage for those who want to become professionals. Japanese participants have astonished the people of the region by winning two prizes at the competition in 2004 and four in 2007.

How did you pursue the art of calligraphy after that?

I was in Saudi Arabia for about five years altogether, and after returning to Japan continued to study calligraphy on my own, learning by copying. And one day in 1988 I received an invitation to a high-profile calligraphy convention festival sponsored by the Iraqi government, then under the regime of Saddam Hussein. The festival in Baghdad drew 190 top professionals from all over the world—the Middle East, West Asia, Central and Southeast Asia, the United States, France, Spain. For the first time, I had the opportunity to meet other Arabic calligraphers, including the Turkish master calligrapher who would become my teacher, Hasan Çelebi. Participating in this event was a turning point in my life. All of these calligraphers welcomed me as a comrade who shared the same aspirations and purpose, regardless of ethnicity, nationality, or religion. Some of them expressed interest in Japanese calligraphy and asked me to send them brushes and Japanese ink. I still keep in touch with them now, almost 30 years later.

After Master Çelebi agreed to become my teacher, I sent him samples of my best work via airmail. When they came back to me with copious corrections in red ink, I was quite dejected. Master Çelebi warned me archly, “It takes a century to become a calligrapher.” But in 1989 and 1992 I entered the Istanbul International Calligraphy Competition, and was able to win some small prizes [a Jury’s Encouragement Prize in 1990 and an Incentive Prize in 1993]. 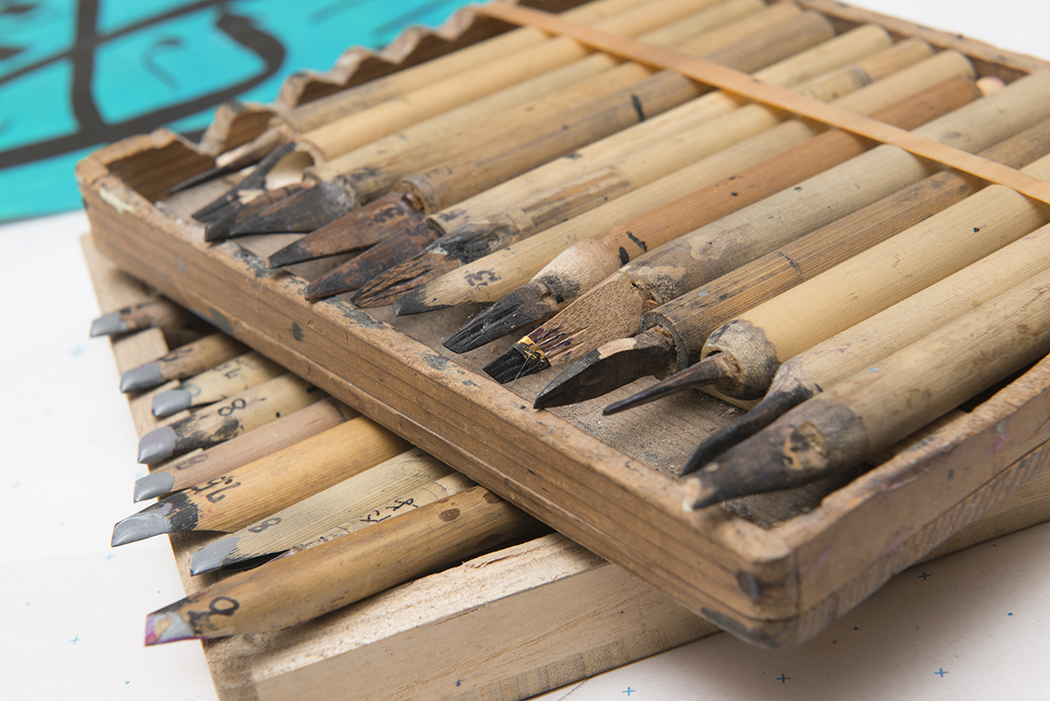 Arabic calligraphers make their own pens for eight scripts and different thicknesses of line.

I heard that many people in the Middle East sense a Japanese aesthetic in your work.

It’s not something conscious on my part, but it’s probably true that they sense something East Asian in my approach to color and form. I certainly have no intention of trying to introduce Japan through my work. I want to process the beauty of the calligraphy through my own internal cycle, reconstruct it, and share the results with people of the Arab world. That’s all. At first I was anxious about whether my style of expression would be accepted. But after I won a couple of prizes, in the early 1990s I received a series of offers for solo exhibitions in Middle Eastern countries—something that amazed me, quite honestly.

Your compositional style, fusing images of nature and the cosmos with beautifully rendered letters, has been praised as “revolutionary.” Where did you get the idea for it?

Commonly, the Middle Eastern tradition has been to fill blank areas surrounding text with a variety of decorative patterns—arabesques, geometric patterns, floral motifs. But at some point I began to question this style, and when I stopped adding decoration, I realized that the words themselves stood out. From that time onward, I began to find my own way to express the meaning of the words through design, color, and form. And I suppose the emphasis I place on empty space might be called “Japanese” in some sense.

More than anything else, I feel that there is a “second nature” that is reproduced on paper by Arabic calligraphy. What at first glance seem the simple, straightforward lines of lettering on closer examination suggest the natural flow of water in a stream or the scattering of leaves in the wind. Nature in the Middle East is largely desert, an extremely harsh environment. In desert regions daytime temperatures can rise to over 50°C and fall below 0°C at night. This is a zone without flowers and trees or a sense of the changing seasons, so there was a great thirst for natural beauty. Islam forbids the worship of images—but they had letters. So perhaps it was through letters that they could enjoy the paradise of nature. In Japan we have the idea of “being at one with nature,” but that is probably because we were blessed with a hospitable environment. In the art of letters that is Arabic calligraphy, I think we can see a cry—of longing and perhaps of protest—from the Arab people toward the natural world. Why do you think Arabic calligraphy appeals to people in Japan, despite the geographic and cultural distance?

I think because we have a cultural history that includes calligraphy as an important element, and an aesthetic sense that evolved in a rich natural environment, we are actually able to understand and empathize with the thirst for natural beauty felt so keenly by the people of the Middle East. There are really no examples in the Arabic-speaking countries of the way in which ordinary people in Japan of all ages have gotten ahold of Arabic calligraphy, digested it in their own way, and delighted in the practice of it. People from the Middle East ask, “Why Japan?” The Japanese students will answer, “I may not understand the language, but the letters are so beautiful.” The keen eye for beauty of the Japanese enables them to reenvision the splendid art of the Arab world, which can then respond to our suggestions, as we work together to deepen our shared experience. That is my ultimate hope, and what I think of as genuine cross-cultural communication.

The legacy our ancestors spent a millennium in making is passed to us, and for a brief time we run with it at the forefront of history, deepening it and then passing it on to the generations to come. In doing so, I feel an enormous potential for the birth of a common base between the Arab world and Japan. We should not be bound by existing ways of thinking, and realize it is sufficient to work at building whatever we both find good and true, no matter how small it may seem.

To build a common base, mutual understanding is necessary, isn’t it?
It’s the most difficult thing, but the most important one: understanding the fundamentals of what we each value. The Japanese have been born into a relatively hospitable environment, a world in which, and I hope this isn’t taken the wrong way, religion is unnecessary. Having had the experience of living in their environment, I felt I understood why they turned in such a spiritual and fundamental direction. The people of the Middle East are immersed in a harsh natural environment in which it is difficult to see the reason for human existence without religion or the creation of a “second nature.” How are we to understand this basic fact? Much is made here in Japan about customs such as fasting during Ramadan or praying five times a day, but what is essential goes beyond these religious practices.

The Qur’an tells us, “Wherever you turn, there is the face of God.” This is a teaching that all living things share the same source, and that all are one in God. Say, for example, a flower blooms in the desert. Think about the awesome power which causes that flower to bloom, and consider the fundamental meaning of all things. This is difficult to do in the midst of our contemporary society, where all daily activity is converted into monetary terms. But if you keep on trying to think in this way, and don’t give up, I think you can connect with the spirit of the Muslims of the Arab world and their effort “always to live at one with God.” Nor is this limited to Islamic or Arab culture. The superficial expressions of it may vary, but at base we are all the same, and coming to a fresh realization of this is essential.