The Adventures of Tom Sawyer fits into a certain literary mold: an American author writing about the American experience. For many people, that genre—explorations of America by Americans—has formed a basis for understanding the United States. The context is shifting, however. In today’s America, the literary community is showing signs of change. More and more contemporary authors are setting their stories in “somewheres,” moving away from the traditional narrative space of the United States. To learn more about the current state of American literature and get a glimpse into the world of translation, we recently sat down with American literature scholar and translator Fujii Hikaru. 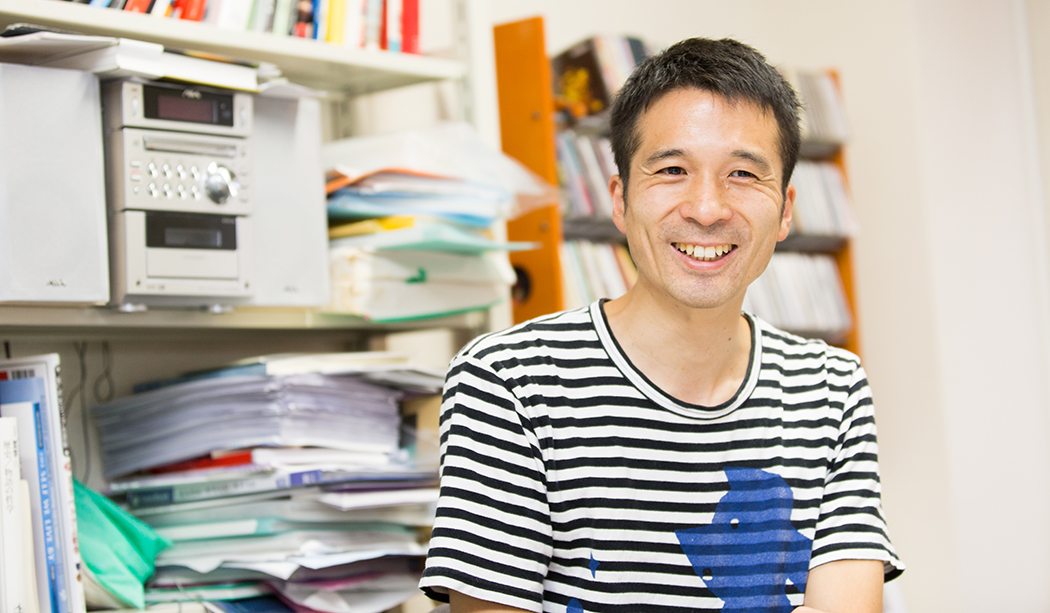 Born in Osaka in 1980. Associate Professor (English Department) at Doshisha University. In 2017, Fujii won the Best Translation Award for his Japanese translation of Anthony Doerr’s All the Light We Cannot See. His other translations include Denis Johnson’s Tree of Smoke, Wells Tower’s Everything Ravaged, Everything Burned, and Seth Fried’s The Great Frustration. Fujii has also authored Taminaru kara arechi e [From the terminal to the wasteland] (2016, Chuokoron Shinsha), a collection of essays on contemporary American literature, and edited Bungei hon’yaku nyumon [An introduction to translating creative writing] (2017, Film Art).

What got you into American literature?
I started out as a history major in college, but a class I took on contemporary American literature altered my viewpoint: Exploring all the symbolism in the works we read was so exciting that I ended up switching my major to English literature. I’m not much of a fan of the United States as a country, actually—the things America did in the Vietnam War, the country’s involvement in Palestine, the list goes on— but the American novels that have come out of that context are incredible. When I read Tim O’Brien’s hard-hitting The Things They Carried, a novel about the Vietnam War experience, for example, I felt myself wanting to probe that gap. Then came 9.11, which got me thinking about all the underlying causes of anti-American animosity and really made me want to understand the United States at a deeper level.

So you wanted to learn about the United States through novels?

At the time, yes. American literature has a pretty clear connection with society, and there’s no real idea that it’s for a select audience—literature has deep roots in the common people. In Europe, being a popular, successful writer hurts your critical reception; best-sellers can never be masterpieces, basically. In the United States, though, a best-seller can be a classic. Writers want to appeal to a broad audience. Freedom, a book by Jonathan Franzen, is about regular people having to decide between right and wrong and struggling to survive in society. When you read that kind of story, you can connect with it. Years ago, American writers tended to direct their narratives toward those fundamental questions: Who am I? What is the United States?

Would you say that novels have been changing course since then?

When multiculturalism really started to take root around the 1980s, second- and third-generation minority writers started writing out of their own identities. Things were a bit different back then: American society embraced those new voices as elements of cultural diversity—that inclusiveness made the narratives wholly “American,” all part of the American story. In the 21st century, though, we’re seeing more and more immigrant authors writing in non-native English. Instead of setting their works in their adopted home of the United States, the writers in this new wave tend to opt for “somewheres” and often weave their narratives through their home countries; they portray life in their native lands and navigate the space between their two “homes.” Yiyun Li, from China, Junot Díaz, from the Dominican Republic, and Aleksandar Hemon, a Bosnian writer, all fall into that category.

Why do you think they write in English?

Well, a lot of them did their primary schooling in English. Daniel Alarcón is originally from Peru but learned how to read and write in English in the United States—and he once said that when trying to write, his English has more descriptive range, more expressive options, than his Spanish does. That, I think, is why a lot of non-native speakers choose to write in English. Globalization has been a big factor: People are more mobile than they’ve ever been, for one thing, and the middle classes are getting better access to English-based education. 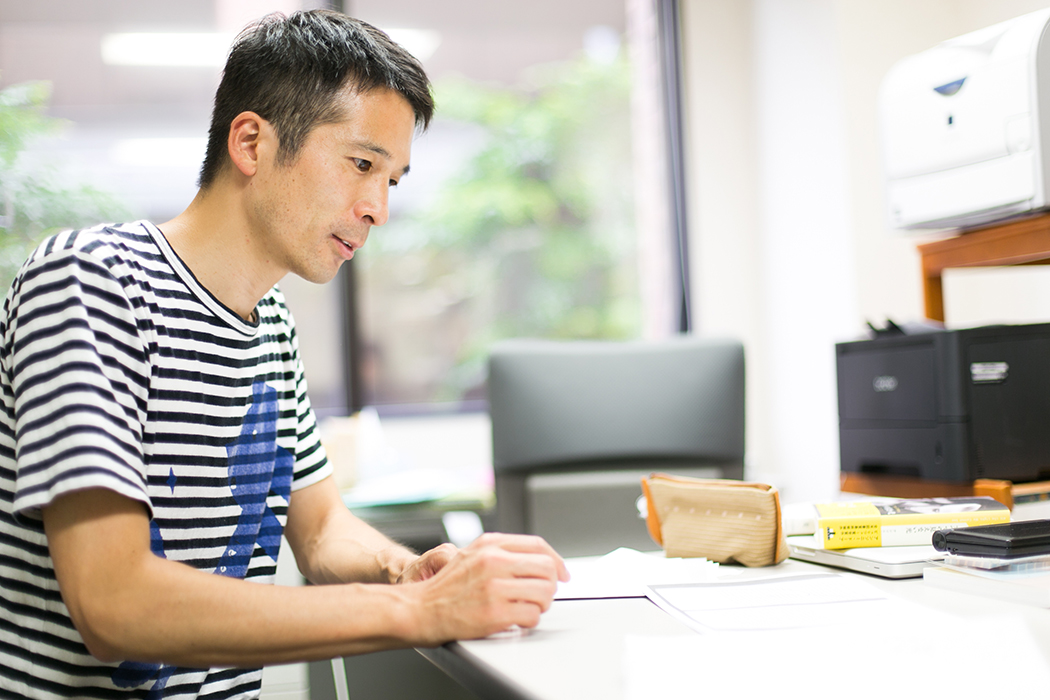 What is “America” to those authors?

Two or three generations ago, immigrants came to the United States in search of jobs and freedom. Now, though, people aren’t always making America their home by design. Hemon, the Bosnian writer I mentioned a little earlier, was on a temporary reporting assignment in the United States and ended up stranded there because of the Yugoslav wars—he simply couldn’t go home. If he’d been reporting in France, he might’ve become a French author. America isn’t necessarily the target destination for a lot of these authors. It’s not like they have to stay in America, either. They could go somewhere else if the spirit moved them.

That whole sense of mobility, the knowledge that you could theoretically go anywhere at any time, is kind of like being in an airport terminal. You’re in that place at that specific moment, sure, but you don’t know where you’re going to be next. I get that sense when I read these new authors—they’ve all got their own distinct, individual styles and personalities, but that terminal-like “placelessness” feeling is a common link. Another thing about these non-native writers is the scope of their stories, which tend to venture into more stateless narrative territory instead of pursuing more inward-looking portrayals of American life. Oftentimes, their characters inhabit desolate “wastelands.” It’s a choice that, from my perspective, reflects the writers’ sensitivity to the extreme duality of modern-day life: the world of fast-moving technology and endless mobility versus the world of barren emptiness.

How do you see those trends influencing American writers?

There’s an unbroken lineage of writers who’ve made it their mission to write about America, like Don Delillo and Thomas Pynchon, but you can also find authors who are expanding their horizons into a more mobile age. Anthony Doerr is a good example: He’s an American writer, but his works are about a dam flooding a Chinese village, a woman who loses her memory in South Africa, and other scenarios that don’t take place anywhere close to the United States. Some of his novels don’t even have any American characters. He’s accepting the idea that American writers don’t need to restrict their visions to their national borders.

Up until fairly recently, American writers who set their stories in other countries would normally follow American characters and converge on that classic theme of what it means to be an American. Doerr does things differently. For him, literary creativity means being able to traverse between countries and move around freely. Anthony Marra is another interesting example. He doesn’t write about his roots as an American at all—he writes exclusively about Chechnya. Doerr and Marra both craft their narratives out of their experiences, not out of their national identities.

Foreign-born American writers might be products of chance, like I said, but even some native-born American authors are starting to delve into new, outward-looking themes—chance encounters, in many cases—and writing about some kind of different world. It’s basically two sides of the same coin. I love reading what they write, and I’d love to translate them.

What is your basic mindset when translating?

You might expect immigrant writers to obey the conventions of English, which continues to impose an increasingly dominating presence as globalization churns ahead, but they’re actually creating a new linguistic culture. They treat a language as an individual, discrete entity, and not as a larger, all-consuming context that they have to confine themselves to. Using language as a free, open palette, they phrase their sentences based on how the sounds and letters of the words fit together. That’s something people don’t usually do under normal linguistic conventions, and it leads to combinations of words that native speakers wouldn’t ever dream up on their own. In a way, it kind of adds kinks to the phrasing, twisting smooth, natural English into something unique. I think it’s a new literary environment, one that gives immigrant authors a chance to explore the spaces between their home countries and their new homes in the United States.

When you translate that kind of content, the foreignness—that sense of being out of the familiar rhythm—gets even more palpable. I try to make my Japanese renderings reflect that. I think you can see it in my translation of The People of Paper, a novel by Mexican author Salvador Plascencia. When I came across an odd turn of phrase in his English, I tried to be as faithful to the source as possible—to make something seem a little “off” in the Japanese, too. 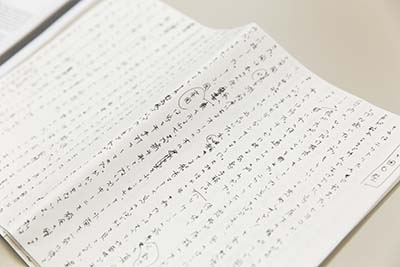 Fujii does his first draft by hand.

Does being a scholar help you as a translator?

Every single description and scene in a work of literature has multiple layers of meaning. When you make literature your specialty and start researching the field, you learn how to parse those different nuances—and you take that mindset into everything you read. You might pick up subtle shades of meaning in repeated words, for example, or see the allegorical constructs of certain scenes. As a scholar, you get more sensitive to symbolism, the social norms informing scenes, and the historical context of each work. When you translate, generally, you have to make sure that you retain all those elements. You can’t just concentrate on the symbolism but sacrifice the diction in the original, for example; everything needs to come together.
To express the meaning of a sentence in another language, you obviously have to interpret it. What translators have to do, though, is make sure that their renderings don’t reduce the content to a single meaning and force a specific interpretation on the reader. A translator from Brazil said that translations need to be open to every possible interpretation— and I couldn’t agree more.

For you, what does it mean to translate works by contemporary American authors?

The works that these writers produce, with their distinctly “foreign” tones, probably wouldn’t have ever taken shape if the authors hadn’t felt a resistance to today’s world—a place where individual identities are constantly dissolving and colliding. Translating that type of content isn’t so much about the encounter between two cultures—it might be more about the meeting of individual identities, a connection that transcends language.