Interview: In Conversation with Kohtake Naohiko
“Space Technology and Beyond for a Sustainable Future”

With the Michibiki Quasi-zenith Satellite System set to start providing a Japanese version of GPS service this fall, satellites and other space systems are emerging into the spotlight. We recently spoke with Keio University Graduate School Professor Kohtake Naohiko, a veteran of H-IIA rocket launches and satellite development at the Japan Aerospace Exploration Agency (JAXA), to learn how space technologies can be applied in resolving many of the social issues confronting Japan and other countries and in helping improve our lives. 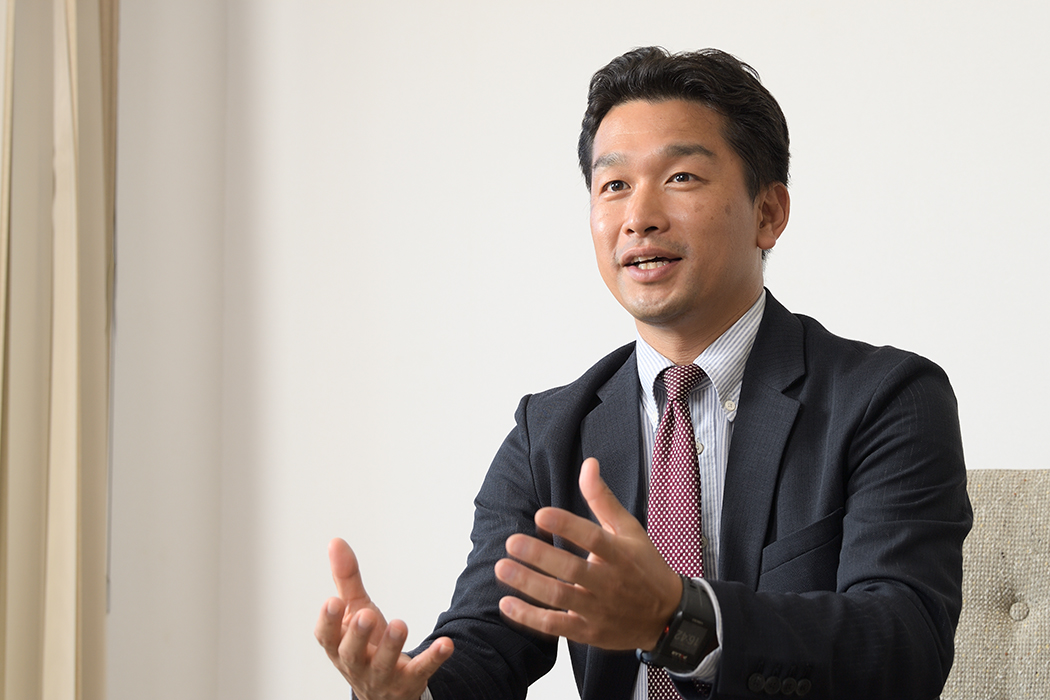 Satellites play a vital role in our day-to-day lives and industrial development. What do positioning satellites do?

There are many types of satellites, including earth observation satellites, broadcast/communications satellites, and positioning satellites that measure the location of people and things. The Global Positioning System, which the US government developed during the Cold War, has found its way into use in Japan and many other countries. In addition to the United States, Russia, the EU, China, India, and Japan have launched their own positioning satellites—which now number over 100. These satellites have had a palpable impact on our daily lives, providing basic positioning information for car navigation systems and smartphones and serving as the source for exact time readings on electronic devices. The satellites also play a vital role in disaster prevention, the agriculture, forestry, and fishing sectors, distribution, air and maritime traffic control, and infectious disease control.

What will change when Michibiki goes into fullscale operation?

What makes Michibiki a breakthrough service is how it’ll enhance positioning precision. When all four satellites in the system start working, there will always be at least one satellite in orbit directly over Japan. The signals will come straight down, avoiding the noise-inducing effects of skyscrapers and mountains and substantially improving overall precision. Pairing conventional GPS with Michibiki can reduce positioning error from more than 10 meters to less than a meter. Michibiki will be able to provide high-quality positioning information in a stable, round-the-clock fashion in any outdoor location in Japan that can be reached by its satellite waves.

What new services will it offer?

With better positioning precision, autonomous cars will become more realistic: navigation systems would get people exactly where they want to go, and operations requiring pinpoint accuracy—like lane changes—would become easier. Operational tests of unmanned tractors are already underway in the farm sector, and drone deliveries to remote islands have been implemented. Applications are being explored in sports and healthcare as well. There will also be major big data benefits from those developments. High-precision positioning data in urban settings is being used to study traffic patterns and applied in urban development, disaster preparedness, and marketing. If we get access to even higher-quality data, users would naturally be able to deliver even higher-quality services. 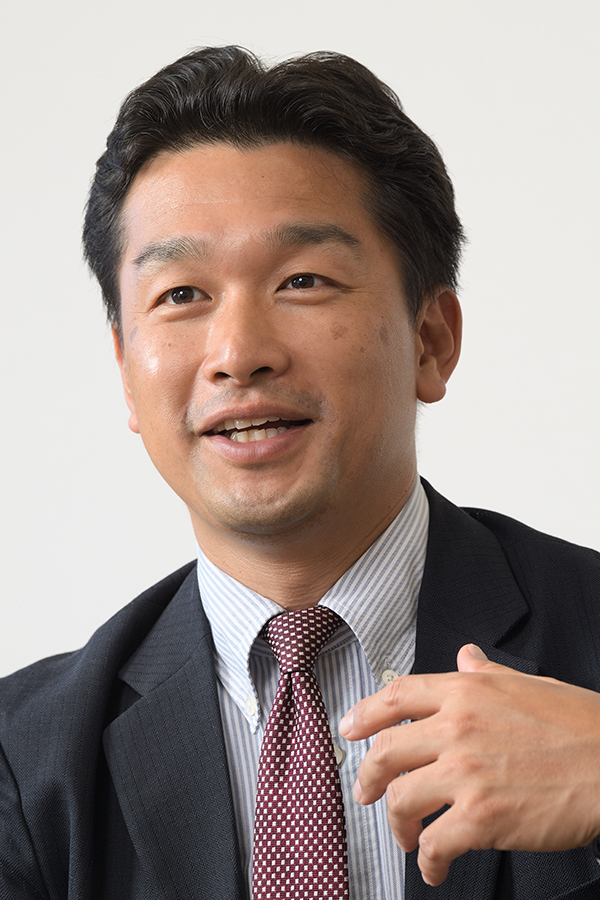 How will it be applied in sports?

Positioning information has game-changing potential in the sports world, and my laboratory has been actively supporting a number of technology-driven endeavors. Players are being fitted with GPS and Michibiki receivers to gather data on each athlete’s total in-game distance traveled, top speed, and other key points that can help teams develop optimal strategies, prevent injuries, and design individual training regimens. Positioning technology is already beginning to shape tactics in J.League soccer, rugby, hockey, and American football. Practices can be developed that place equal or slightly higher stress than in actual game situations to limit the risk of injuries. In fact, since the system to track players’ various movements was implemented, the Keio University rugby team has seen injuries drop significantly.

Michibiki’s signals can be accessed in many parts of Asia and Oceania. For countries other than Japan, though, there won’t always be a satellite directly overhead. So there might not be the same level of precision, but the system will still offer quite good measurements. Michibiki can also send short messages directly to smartphones, something that GPS can’t do. This means that if land-based communications networks are weak or down due to a major natural disaster, Michibiki can send emergency information directly to user devices. That’s what makes having richer infrastructure in space so important. Receiver technology is also improving, so many more devices can now handle multiple satellite signals. That versatility makes it possible for users in countries lacking land infrastructure or supplies of special devices to implement newly developed service.

How are space systems being used in Asia?

A critical issue for many Asian countries is ensuring stable agricultural development. My laboratory was asked by the Japanese government to help address problems in planting oil palm trees faced by a Malaysian company. Farmers had been following traditional techniques, which involved cutting down low-performing trees, leveling the land, using a tape measure to place markers at a set interval, and then planting a tree at each marker.

However, the land isn’t always so flat and uniform; terrain and rocks can hinder correct measurement and cause interference between evenly spaced trees. Calculation methods designed to work around the uneven land patterns hadn’t been successful.

When we went onsite, we learned that most of the workers were migrants and didn’t have a strong grasp of what they were doing or how to do it. In order to make the process more systematic, we decided to fuse data from drones and satellites into a three-dimensional topographical map of the area and use that data to derive the right latitudes, longitudes, and heights for an optimal layout. We then loaded the data onto portable devices with high-precision positioning capabilities and created a system that would alert workers by sound and on the screen where the ideal planting locations were. As a result, workers were able to plant trees faster, more accurately, and in higher numbers than before. 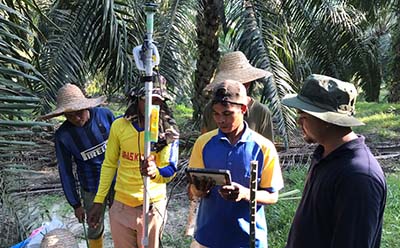 It definitely is. In Cambodia and India, we’re using space systems for farm microfinance. In areas where income is extremely unstable, there’s often no culture of investing or saving money, so farmers find themselves in debt. They don’t have income statements, either, so they have no credit information to submit when applying for a loan.

What we did was to utilize satellite information and smartphone technologies to get an accurate picture of credit risks in farming communities. We asked community leaders to gather data on farm locations, crop varieties, shipping volume and timing, and other data via smartphone devices. Satellites, meanwhile, measured farmland performance from the air, ascertaining data for farm acreage, distance from water sources, and the growth status of crops. Fusing and analyzing these two sets of data made it possible to measure credit risk and enable both farmers and lenders to make optimal financing decisions.

We’re moving toward a world where providing your own data can bring both personal and societal benefits. That said, sharing information when you don’t know how it’s going to be used can be somewhat disconcerting. The Japanese government is examining various rules to protect individual privacy, but there are no clear answers yet.

What’s the best plan of action, then? First off, we obviously need encryption, digital watermarking, and other technologies that can help guarantee proper information management. We also need measures to safeguard information on the user side: steps to ensure that individuals know—or have access to ways of understanding—the risks involved in providing personal information. I think we’ll have to build social structures that nurture information literacy to help people better understand the risk-value ratio.

How can Japan apply its technological strengths to address social issues?

Japan isn’t a leader in many technology spheres now. With the commodification of technology accelerating, the domains in which Japan holds a commanding lead are dwindling. In the examples I cited earlier, what were needed were not just high-end technologies but rather the system-design skills and the management ability to create valuable services.

Good services depend on a thorough understanding of needs, so the first step is getting a grasp of the issues with which local people, organizations, or communities are grappling. The students in my laboratory are diverse in terms of gender, age, nationality, areas of specialization, and work experience, but they’re all learning system design and management. When we get a request from an outside organization, either Japanese or foreign, we first go onsite, observe the operations, gather information, and sometimes even perform tasks alongside the workers in the field. When we can forge close, trusting bonds, this gives us a fuller perspective on what the people involved really need and where the problems are. That’s our stepping-off point to formulating scenarios and designing optimal systems in what I call the “solution spaces” of various technologies and structures, which help us align our solutions more closely with real-life conditions.

We don’t always incorporate elements of space technology; that might be our specialty, but we’re not going to force it into a solution if it doesn’t fit [laughs]. The important thing is applying technology with a mind for co-creation—a common vision and passion for a future worth creating.