Washington, D.C., the preeminent global political city, is home to various institutions of different countries including NGOs, think tanks, and international organizations. In recent years, the presence of Asia is ever more increasing within Washington and its changing role raises major issues regarding how rising powers assimilate themselves into the global governance structure. Professor Calder will examine how Asian countries establish, increase, and leverage their Washington presence, and the impact on Washington itself and the decisions made there.

Before arriving at SAIS in 2003, Professor Calder taught for twenty years at Princeton University, and was a Lecturer on Government at Harvard University. Having been a member of the Council on Foreign Relations since 1990, he also served as Special Advisor to the U.S. Ambassador to Japan, Japan Chair at the Center for Strategic and International Studies, and as the first Executive Director of Harvard University’s Program on U.S.-Japan Relations. Received his Ph.D. from Harvard University in 1979, where he worked under the direction of Edwin O. Reischauer. He is the author of numerous books including, most recently, Circles of Compensation: Economic Growth and the Globalization of Japan (Stanford University Press, 2017). He was awarded the Order of the Rising Sun, Gold Rays with Neck Ribbon in 2014. Professor Calder attended IUC during the 1974–75 academic year.

Johns Hopkins Professor Kent Calder believes that mutual understanding is essential for continued Japan-US dialogue and notes that intimate knowledge of the political dynamics in Washington, DC, can help deepen such understanding. Calder, who has been an astute observer of Washington’s transformation over the past half century, outlined the city’s characteristics and the rapidly growing presence of Asian countries in the US capital.

Valuable Networking Opportunities
Washington, DC, the world’s preeminent global political city, is home to the embassies of various countries and the headquarters of multilateral institutions. In his lecture, Calder noted that the city first developed as a community and that it was not until the 1920s through the end of World War II that the functions of the central government became the chief driver of the city’s growth. This suggests that the government does not monopolize the life of the city; it is an open city where even nongovernmental groups can actively engage in the policymaking process. 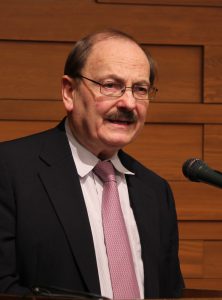 As the United States emerged as the dominant superpower with global influence following World War II, Washington began to attract clusters of private organizations seeking access to political leaders, namely, law firms, lobbyists, the media, NGOs, think tanks, the knowledge industry, and multilateral institutions. These groups nurtured ties on many tiers to gain leverage on policy decisions, creating a fuzzy “penumbra” of power and turning Washington into an information hub.

Calder pointed out that the “revolving door” through which people move in and out of government whenever the administration changes hands offers valuable opportunities for outsiders—including foreign governments—to gain influence. Networking with think-tankers or university professors who had until recently worked in government, or those who might shortly become political appointees is an efficient way of gaining insights into the political status quo and winning a voice in the policymaking process. Having a physical presence in Washington can thus be a much more effective way of swaying political decisions than the traditional approach of relying on lobbyists or going through diplomatic channels.

A Rising Asian Presence
Washington has been in a constant state of flux over the years in keeping with the changing times, Calder noted, but the transformation over the past decade is particularly striking, as there has been a dramatic rise in the presence of foreign governments. The city’s foreign-born population has been steadily growing since the 1980s, and the share of Asian-born in 2016 was 38%. With the number of embassies and foreign-related lobbyists on the rise, the city’s ties to foreign countries have grown much stronger. Asian countries are keen on maintaining close ties, as many are highly dependent on the United States for trade and security. Calder noted that competition for influence has intensified notably over the past two decades among Japan, South Korea, and China.

News travels much faster today in the information age, and influencing policy requires ascertaining trends and taking action quickly. This makes it all the more important, Calder emphasized, to maintain a strong presence in Washington and thereby secure direct access to key policymakers.

Repeated cuts in the public communication budget had, until recently, eroded Japan’s presence in Washington, but spending has revived since 2013 due to political stability, enabling the country to convey its message more effectively. And while Japanese businesses had prioritized New York, given the value of the economic relationship, this, too, Calder believes, has begun to change. Keidanren reopened its liaison entity in Washington in 2015, and Okinawa Prefecture has also set up an office in recognition of the city’s importance. 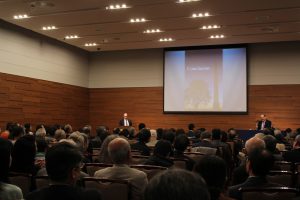 Outmaneuvering Bigger Countries
In his 2014 book, Asia in Washington: Exploring the Penumbra of Transnational Power, Calder analyzed the means by which Asian countries have attempted to gain influence in the city. He was surprised to uncover a rich assortment of approaches and to find that the biggest countries did not always have the greatest leverage.

Given the increasing speed with which US policy is changing, the countries and organizations that have responded most flexibly to those changes appear to be the most successful. Calder cites Singapore and South Korea as examples of how small countries can often outmaneuver bigger ones to gain greater influence.

The Importance of Understanding Washington Dynamics
Many Asian countries are expanding their external relations budgets in response to Donald Trump and the rise of populism in the United States, but whether this will pay off is still unclear. If the president is consciously employing the “madman theory” as a negotiating ploy, other governments, Calder said, must do a better job of ascertaining the administration’s true intentions. This makes it all the more important to have a full grasp of Washington dynamics. Should Japan be negligent, Calder cautioned, the bilateral relationship could begin to deteriorate.