Derek Gromadzki is both a poet and a translator. But his artistic practice, rather than reflecting this dichotomy, assumes a more amorphous agenda that relies interchangeably upon poetry and translation. Elements of his translations become sources of innovation in his poetry just as stylistic problems worked out in his poems generate new possibilities for approaching the difficulties of translation. A network of several world languages woven across time by etymology undergirds his work. And this structure serves as the basis for the most distinctive features of Gromadzki’s writing: the rhythms and sounds he generates through a meticulous but dynamic approach to prosody.

In Japan, Gromadzki plans to conduct research for his second book of poetry, Horology, which draws upon the history of mechanical timekeeping as well as different cultural conceptions of time in order to explore new possibilities for the experience of time in poetry. In order to unravel the particularities of time as it has been and is presently imagined in Japanese culture, he plans to visit several of Japanese watchmaker Seiko’s facilities, as well as interviewing local scientists and artists, including fellow writer Yoshimasu Gozo, and the researchers at the Yukawa Institute for Theoretical Physics. 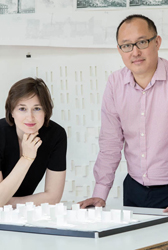 Together, Phu Hoang and Rachely Rotem run MODU, an interdisciplinary architecture studio with inventive projects that often emphasize the weather’s role in shaping a dwelling’s formal and experiential particularities. Their proposals are usually driven by a desire to contest and dismantle the logic of modern architecture, especially in its costly attempts to negate weather. In addition to their busy international practice, Hoang & Rotem are also active in teaching and research at some of America’s most prestigious universities.

The duo will spend their time in Japan researching the way in which the archipelago’s varied climate influences local architecture (both past and present) and the approach of the architects and builders behind it.

Born and raised in Alewa, on the island of Oahu, Hawaii, Laurel Nakanishi is the author of the award-winning chapbook Mānoa|Makai, and her poetry and essays have appeared in numerous national magazines. Her work is grounded in the natural world and features myth, imagery, and storytelling that is often genre-bending. In addition to her literary work, Nakanishi is deeply committed to community projects. She is the founder and director of NicaArts in Nicaragua, and has served as the founding coordinator at O, Miami’s Sunroom community poetry program.

During her residency, Nakanishi plans to revisit the henro pilgrimage route and write a lyric memoir of the experience. She will also interview pilgrimage scholars around the country with the aim of incorporating the voices of other pilgrims into her creative process. Coming from a Japanese-American family with a deep connection to Shingon Buddhism, Nakanishi believes the experience will reinforce her understanding of her culture and inform her teaching. 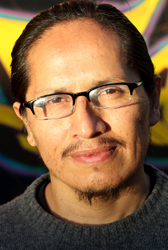 José Navarrete’s practice, which he began in his native México City, integrates choreography, dance and education by taking performance and dance beyond the stage and into the community. In Navarrete’s work, there is a carefully researched dialogue between transdisciplinary experimental performance and the traditional music, rituals and dances of cultures in which the artist has immersed himself for years. With Debby Kajiyama, he leads Naka Dance Theater, an outfit that creates interdisciplinary performance works using movement, theater, art installation, multimedia, and site-specific environments.

Navarrete will spend his residency mainly in Iwate prefecture, where he will immerse himself in all aspects of the practice of Shishi-odori (Deer Dance), which he sees not only as an artistic expression, but also as a bonding element that gives the communities that keep it alive continuity and strength. 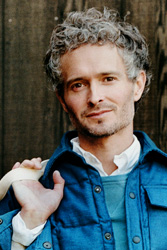 Jesse Schlesinger is a visual artist residing in San Francisco and Sausalito. He works in a variety of media, including sculpture, installation, drawing, and photography. As the son of a carpenter, Schlesinger is deeply connected to carpentry and architecture. In his sculptures and installations, Schlesinger works with a hand-crafted aesthetic utilizing foraged natural and urban materials and found objects. Both private and public, these works explore how we inhabit and contemplate space.

Schlesinger’s work is deeply influenced by the trans-Pacific dialogue existing between Japan and California for many decades. While in Japan, he will explore rural and urban settings in search of materials to utilize in artworks. He is eager to engage in dialogue with local artists and craftspeople, recognizing there is immense potential in these conversations.